Air Fryer vs Convection Oven: Which One Is Better? 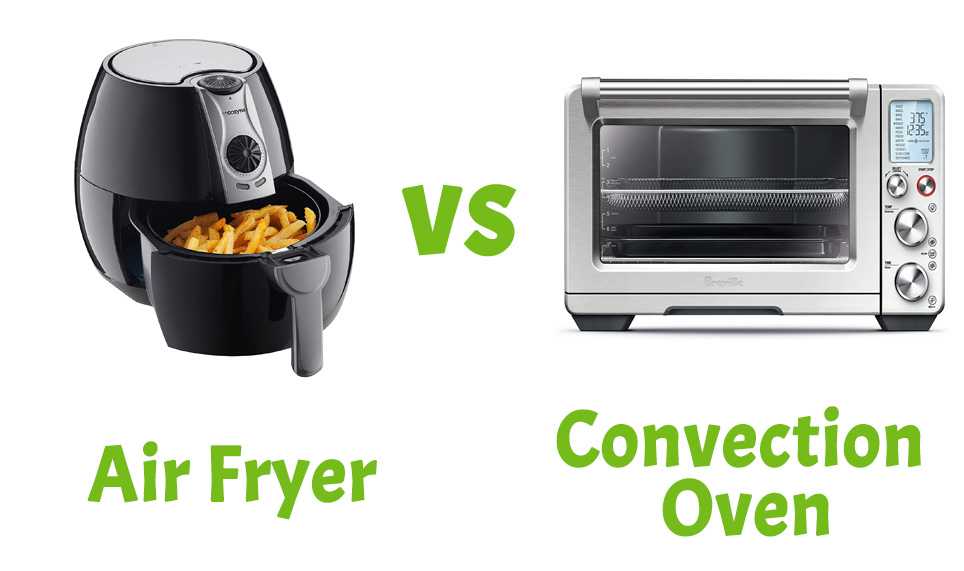 If you want to know what's the difference between air fryer and convection oven, this is the post for you 🙂

We'll go over the similarities and differences in both as well as what kind of foods can be cooked in each. To begin with I'll go over how each appliance works.

How do convection ovens work

Convections ovens are basically standard toaster ovens with a fan on the inside. They work by using the normal convection currents created by heated air to move the hot air through the oven and cook your food.

The fan inside the oven helps to circulate the air more evenly to eliminate hot spots or areas of cooler air. This helps the food cook faster and more evenly compared to a conventional oven.

How do air fryers work

The air is directed downwards through a heating element. It circulates around the food on all sides. Once it hits the bottom of he cooking compartment it bounces back up around the food and to the top again.

Air frying is a healthier alternative to deep frying. Instead of cooking crispy chicken wings using hot oil, you can get the same results by using hot air and make air fryer chicken wings.

Air fryer allows you to make side dishes, casseroles, pizzas and even birthday cakes and cookies as you an see bellow 🙂

Can I use my traditional oven  as an air fryer?

No. You can't really air fry in traditional ovens unless your model has an air fry setting. You can bake, grill or cook food in many ways, but it won't be the same.

Can I use my convection oven as an air fryer?

Yes, you can air fry in your convection oven and get great results. For example, you can make french fries or crispy chicken tenders easily. For more ideas, check out my Air Fryer Recipes.

What are the similarities between convection ovens and air fryers?

What are the main differences between convection ovens and air fryers?

Which is better convection oven or air fryer?

How do you know which of these two kitchen appliances will be the best choice for you? That depends on what you plan on cooking the most and how much you want to cook.

If you are looking for the most versatile cooking device then you would probably want to go with the air fryer. With an air fryer the main advantage you'll get is being able to fry foods.

Another thing is that the air fryer is better at grilling foods as well. In addition to this you can still roast or bake foods just like you could do with a convection oven.

The second thing you would want to consider is the quantity of food you will be preparing. In general air fryers are much smaller than convection ovens.

If you are cooking for a family and you don't want to spend the time to cook your meals in several batches, then you would want to go with the convection oven.

Also if you want to cook larger items like a whole chicken or ham, your best bet is to get a convection oven. However, some companies have started producing larger capacity air fryers for this exact purpose.

Another thing to consider is the amount of space you have in your kitchen. Because convection ovens are large they will require quite a bit of room on your counter top. Also because they are larger storing them out of site when not in use is not really a reasonable option.

If you get a convection oven be sure you are okay with it being a somewhat permanent fixture in your kitchen.

Air fryers are considerable smaller than most convection ovens. If you were considering getting one of these because it will fit nicely in a small or crowded kitchen you still have some things to consider.

With the high temperature and constant air flow inside of an air fryer, if left unchecked it would build to an unsafe pressure. To deal with this issue air fryers vent air during the cooking process.

Although most are much smaller than convection ovens they still need more space to operate. The hot air shouldn't be vented directly under cabinets or near other heat and moisture sensitive items.

The one advantage to having an air fryer is that because it may be smaller, it can be a bit more reasonable to store one in a kitchen cabinet if you don't plan on using often.

However they can be a bit heavy, so if you do plan on using it frequently, your best bet is to find it a permanent home on your kitchen counter top.

The bottom line is both of these products can add value and options to your kitchen. Deciding on which ones a better fit just comes down to what and how much you plan on cooking.

13 thoughts on “Air Fryer vs Convection Oven: Which One Is Better?”