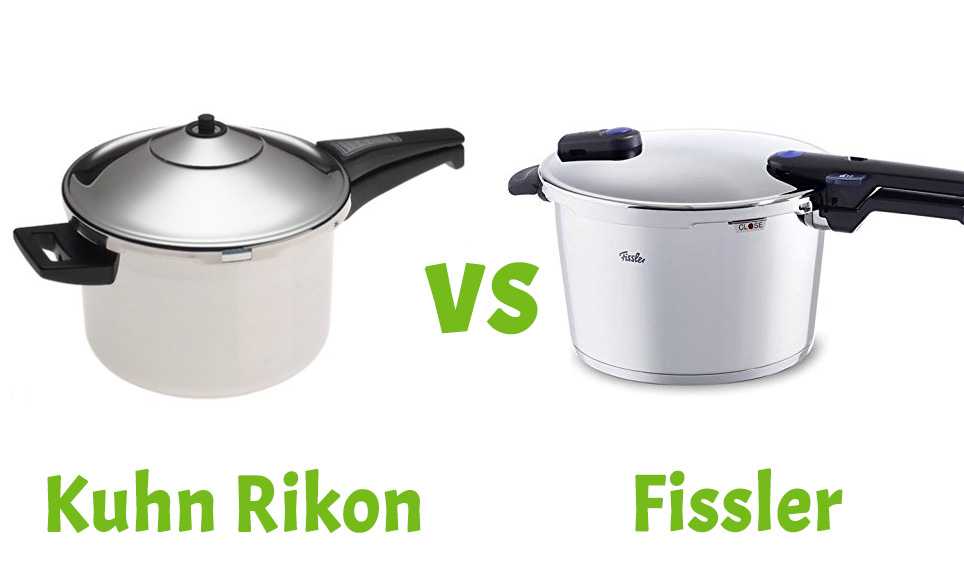 Quite often, it is hard to really differentiate between two stovetop pressure cookers. They generally look so similar that it would seem the cheaper option would be the obvious way to go.

This article will try to help you look at the differences between the Kuhn Rikon Pressure cookers and the Fissler Vitaquick Pressure Cooker.

Hopefully, this article will teach you something that will help you make a bit more of an informed purchase in the future and get a better deal.

Both of these cookers are fantastic, to say the least. You can't really go wrong with either of them. Although they are marked a bit high for a stovetop pressure cooker. Not to say that they aren't worth what they are priced at.

Let's take a look at the differences in these cookers and just why one might be worth more than the other.

What's The Difference Between The Vitaquick And The Kuhn Rikon Cooker?

Both of these cookers are made in a bit of a similar fashion.

The Fissler Vitaquick is made from 18/10 stainless steel and has many benefits you wouldn't get out of your average stovetop cooker.

The Kuhn Rikon is made from the same material but lacks those extra features. But how are they Different?

So now that you know the main differences between these two cookers, you may be wondering just what they have to offer.

Let's take a look at that, starting with the Fissler Vitaquick. 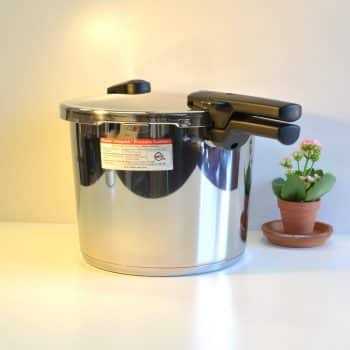 The Fissler Vitaquick cooker is a fantastic pressure cooker and provides an immense amount of functionality and safety. However, this cooker is considered overpriced by many.

This cooker comes in 3 different sizes;

The reason I say it is overpriced is that the cheapest cooker, the 4.5-quart is twice the price of the Fagor Duo! The price tag definitely sets many consumers off just by looking at it. That’s not to say that it isn’t worth that much. But I personally think if I was going to spend that much on a cooker I would need a lot more than a fancy stovetop cooker.

let me go over some of the features this cooker has;

it is quite advanced for a stovetop pressure cooker.

but it does have an issue; The Stainless steel means that this cooker is extremely heavy. Even more so when it is filled, but this is also a good thing in that you know the pot is not flimsy.

Aside from that there really is nothing wrong with this cooker. Though for me, for the price I would rather buy an electric pressure cooker like Instant Pot as it saves electricity and, at this price tag, they usually have a lot more functionality.

Overall, this cooker is fantastic. It isn’t the cheapest, but it definitely isn’t the most expensive one out there. But I’m not sure on my part if it’s splurge-worthy. 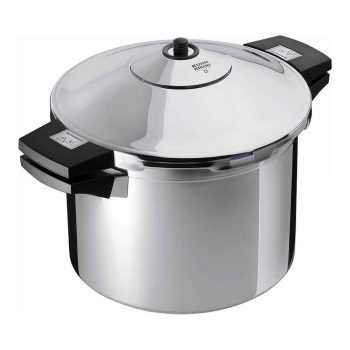 The Kuhn Rikon Stovetop Pressure Cooker is a very nice and sturdy cooker.

It is made from the same 18/10 stainless steel that the Fissler cooker is made from. However, it has the added bonus of an aluminum plating in the bottom of the cooker that allows the heat to spread more evenly than it would on your average stainless steel cooker.

This cooker has five safety systems in place to prevent over pressurizing, however, is not as fancy as the Fissler Vitaquick when it comes to locking the lid in place.

The Kuhn Rikon is somewhat varied, however. It has four sizes;

As I mentioned, these cookers have an aluminum inside that helps it cook more even. This is true for all of the sizes except for the 6-quart cooker. It is the only one of the four that lacks the aluminum core.

The aluminum isn't that big of an issue, but for the price, I would expect it to have it as well as the others.

So there is nothing too fancy about this cooker While it is still certainly sturdy, it does not match the Fissler in fanciness.

Should You Choose The Fissler Vitaquick Or The Kuhn Rikon Cookers?

Honestly, it is a hard one to choose. Personally, if I were to put my money toward either of these cookers it would have to be the Fissler Vitaquick cooker.

The reason I say this is because, at this price point, the Kuhn Rikon simply lacks the same amount of unique functionality that the Fissler has.

Not to say that the Kuhn Rikon isn't worth the buy, it is still a good cooker, but for the price it is at, I would prefer to get the Fissler instead.

While both of these cookers are very pricey, for this one, I recommend the Fissler cooker.

Back to School Recipes