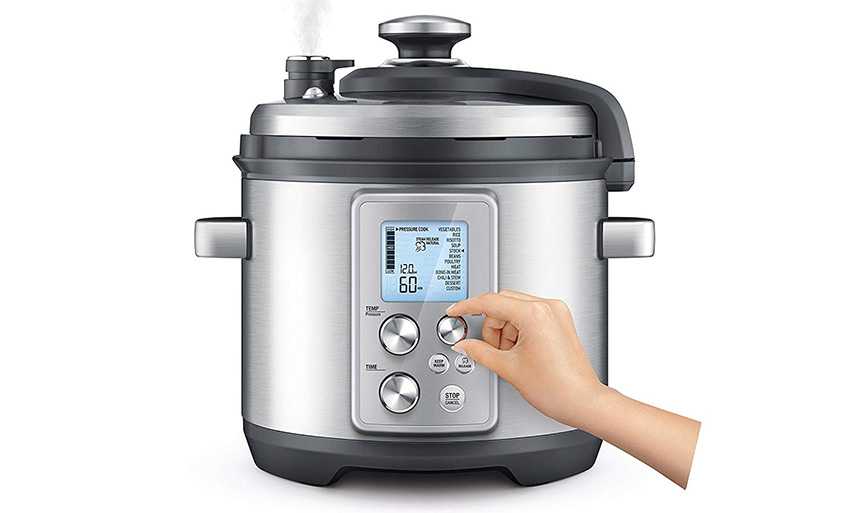 Popular cookers like these get reviewed quite a lot, but the reviews you see usually only scratch the surface on what the cooker is capable of.

This article will be different than those reviews.

Today we are reviewing the Breville Fast Slow Pro and are going to cover the ins and outs of this cooker and all that it is capable of. You will see a lot of bullet-lists and such.

So, most of you have probably heard of the Breville Fast Slow Pro, I mean you wouldn't be here otherwise right? But do you really know the cooker and what it can do? Can you figure that out just by looking at the Amazon page?

No? Okay so then let's take a look into this cooker and see what it can do.

My Review Of The Breville Fast Slow Pro In Summary 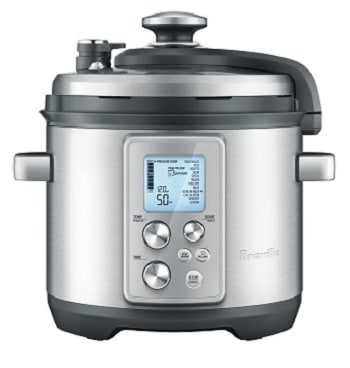 So this cooker is undoubtedly popular. It's one of the best cookers on the market in general.

In General, the Breville Fast Slow Pro is one of the best value cookers you can find on the market.

The Breville Fast Slow Pro is one of 3 pressure cookers manufactured by Breville. It is a high-tech pressure cooker boasting an almost fully interactive LCD interface. The interface changes color based on what function the cooker is performing; Pressurizing, Cooking, or Releasing Steam.

It also has many safety features that make it convenient for modern household use. It has an automatic steam release valve as well as many other things that will make sure your kids cannot hurt themselves by messing with it.

These things, combined with its wide range of cooking ability make it the ideal choice for any modern family.

So now look with me into the more intricate details of this cooker as we look at some more specific features and benefits this cooker can bring to your dinner table.

The Features and Benefits of the Breville Fast Slow Pro

This cooker, as I mentioned, is a high-class electric pressure cooker and is on the steeper end of the market. It has all the simplicity features you would expect from an electric cooker and has a lot of the fancy touches you tend to see in higher priced cookers.

Let's take a look at these;

This cooker without a shadow of a doubt is one of the fanciest cookers out, it has almost everything you could want in an electric pressure cooker, short of full autonomy.

So we've looked at a lot of the good things about this cooker, but just how safe can something this automatic be?

How Safe is the Breville Fast Slow Pro?

This cooker is probably one of the most safety conscious cookers out. This is where the Fast Slow Pro truly shines.

So we've already established it's fancy, now let's make a list of all its safety features;

This cooker comes with many safety features that are uncommon, making it truly stand out in that regard. For the price this cooker is, it definitely earns that price tag here.

So safety nd flashiness is great, but how well does it cook? Let's see how it performs.

How Well Does the Fast Slow Pro Cook?

Most people would probably think this is a silly question but honestly, if we buy a pressure cooker, we want it to function well!

This cooker cooks rather well and from most reviews, it has a decently long life span, one of the safety features it lacks that can potentially decrease the lifespan is the display screen where most of the information and function is held, has no protection facing on it.

For the most part, as long as you are careful that the lid doesn't drip any stray hot water onto the screen you should be fine, but it is a concern.

All in all, it performs all cooking functions much better than you would expect, even for its price.

The cookers wattage comes in at just over an average 6-quart cooker's 1000 watts at 1100 watts. This extra energy cost is mostly for the LED screen power and all the meters in the system.

As with most pricey cookers, the lid and the pot itself are dishwasher safe so you don't need to wash it by hand for the sake of convenience.

With the electric bits and such, it would probably help to wipe them down with an anti-bacterial wipe just to keep it extra clean. Just don't use actual water as it could damage the internals or the screen.

Temperatures and Stats On the Fast Slow Pro

Just some general statistics on the cooker itself and how it functions.

A slow cooking option, as well as high and low-pressure settings for the pressure cooking options. Temperature is adjustable by dial as needed.

The product's dimensions are as follows;

This cooker comes with a few accessories that most generally have as optional extras.

These accessories are as follows;

- cook seafood and things such as vegetable, acts as a sort of deep frying option.

Nice touches for such a fancy cooker, it really fleshes out the Pressure cooking experience.

So Should you Buy this Breville Electric Pressure Cooker?

This cooker is definitely one worth getting, it is a great fancy cooker that provides wonderful function while still looking pretty.

If you're looking for a more affordable option so you can get out without spending a lot then consider another cooker, but with all this added flash this cooker is worth every single penny.